Operation Peace Spring and the West’s Love of PKK

Operation Peace Spring and the West’s Love of PKK 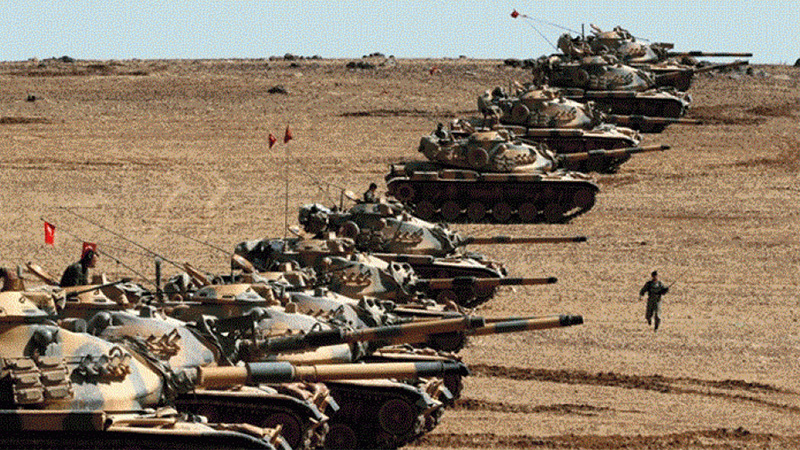 Through its play victim and hero over ISIS, the PKK/PYD threatens both Turkey’s border security and Syria’s territorial integrity. Operation Peace Spring launched by Turkey on October 9 as a reaction to this created de facto situation still continues. Clearing the region from the threat of terrorism, providing a safe return for Syrian refugees in Turkey, protecting Syria’s territorial integrity, and rescuing the whole people of the region from the threat of terrorism are constantly emphasized as the purpose of the operation. Turkey bases its operation in northern Syria on Article 51 of the United Nations Charter; and its operation against the PKK/PYD is also carried out in this context.

Turkey launched its Operation Peace Spring as a reaction to the systematic threat that stem from Syria. Ankara had previously demonstrated its decisive stance through Operation Euphrates Shield and Operation Olive Branch to eliminate the terrorist formations intensified in its Southern borders. Because a non-state actor’s control in Turkish-Syrian border, who carries out terrorism, is against the present status quo and customs of the international system, and it also composes a threat that would paralyze Turkey’s geopolitics in the Middle East in the long run. The corridor to be built in Northern Syria via these non-state actors attenuates the communication channels in the Arab World and also has the potential to seriously harm Turkey’s geopolitical maneuvers.

Apart from the operation’s reflections in the field, the increasingly condemning voices from the West shows that the operation is given different definitions beyond being a counter terrorism operation. Aside from serious reactions in the USA and Europe, the Arab League, Iran and Russia also expressed their concerns about the operation and stated their disagreement.

It seems the Western media and its politicians are likely to forget the fact that Turkey is one of the most important members of NATO.

The Western World, convinced with the idea that the YPG is the most effective ally in eliminating ISIS, appears to be concerned about the rise of ISIS’ power since it may cause the YPG to loose control. In order to spread and consolidate this argument in Western public opinion, the PKK diaspora in the West, partisans of the Fethullah Gulen’s Terrorist Organization (FETO) and their local allies both in Europe and in the USA use the media efficiently. The media appears to be one of the most crucial mechanisms influencing the mentality of the contemporary Western public opinion. Monophonic and manipulative publications of international media institutions controlled by particular capital groups settles a negative perception towards Turkey.

The pro-PKK/PYD approaches created over the last five years been successful in manipulating the Western public opinion against Operation Peace Spring. As if this sympathy is not enough, the West’s historical memory also plays an important role in putting itself as an opposition to Turkey, hence to be ignorant to the terror threat that Turkey is facing. Europe’s particular historical traumas due to the Ottoman conquests have not only evolved into a mere product of the subconscious, it actually entered into Europe’s political realms.

However, despite all the hostile formations, there is no doubt that the operation in the East of Euphrates disrupts the medium and long-term geopolitical objectives of regional and global powers. Other Western powers, especially the USA who prioritizes Israel’s security, is willing to establish a new order with States’ administrations that would not constitute problems for them, not only in Syria but also in every country where the Arab Spring takes place. The most influential medium for this purpose is to create a puppet State via the PYD as the second ‘Israel’ in the region to provide the Western powers an opportunity to intervene whenever needed.

Nowadays it seems the Western media and its politicians are likely to forget the fact that Turkey is one of the most important members of NATO. Yet ignoring disinformation activities and terror threats targeting Turkey also contradicts the functioning of the international system created by the West itself. While the international balance of power seriously changes, the West has started to undermine itself due to its attitude towards Turkey. With its sentiments about Islam and about everything that is related to Islam, the Western public opinion is in a state of applause even for the military coup in Egypt.

Unable to speak clearly about the anger they have in their minds, the easiest argument the West has seems to be focused on the lies within the framework of “the Kurdish population in Syria”. In Syria, where perpetual operation of perception is performed and false information is served relentlessly, many manipulations are carried out with modern communication tools. Again, unilateral publications produced by the Western media aiming to create perceptions are instrumental in placing many groundless and false information in the minds of the international community.

Taking the demographic structure of the region into consideration, contrary to the laid-out perception, the Arab population is at least twice the amount of the Kurdish population in the entire East Euphrates especially from Tal Abyad to Manbij. Approximately 70% of the population in northern Syria is composed of Arabs, 20-22% by Kurds and the rest by the Turkmens. Strategic and important cities such as Raqqa and Deir az Zor’s Arab population is over 90%. On the other hand it is also a known fact that 50% of the Kurdish population living in Northern Syria escaped from the PKK/PYD-controlled regions where they have taken refuge in Turkey and Iraq. The number of Syrian Kurds fleeing from the persecution of the terror organization and taking refuge in Turkey and Northern Iraq is estimated to be between 300 and 400 thousand. In other words, the Arab and Kurdish population of Northern Syria chose to escape from the oppressions of PKK/PYD.

It is known that the PKK/PYD liquidated all the oppositional Kurdish groups after establishing its dominance in the region; it also aims to intimidate the people through assassinations and suppression. For instance, the assassination of the leader of the Kurdish Future Movement Party Mashaal Tammo at the very beginning of the Syrian War, or the forcing of Saleh Muslim (PYD leader)’s brother Professor Mustafa Muslim to take refuge in Turkey clearly reveal the approach of the terror organization. In short, during the period when the PKK/PYD had influential power in the region, it committed many persecutions from imposing heavy taxes, seizure of lands and properties belonging to Arab and opposite Kurdish populations, recruiting young people by force up to ethnic cleansing.

Looking at the issue from the perspective of the decisions made in last 15 years by Turkey, it is unrealistic to claim that Turkish foreign policy is focused on Kurdish opposition. On the other hand, Kurds in Turkey comfortably enjoy the rights and freedoms that they have never had before in the history of the Republic. With the various steps that have been taken to encourage the PKK to lay down arms following the peace process, soon it could be seen clearly that the real purpose of the PKK, who exploited the positive environment of the peace process, is not about to protect the rights of the Kurdish population but to guard its own interests in the global agendas. Simply put, their true objective is neither the Kurdish issue nor human rights but to change the regional geopolitical equation in accordance to the interests of some Powers like Israel.

If the accusation against Turkey’s Operation Peace Spring was real, then why didn’t Turkey carry similar interventions in Northern Iraq where a de facto Kurdish regional administration already exist? Turkey believes that a military intervention in northern Iraq is out of the question in since good economic and political relations are established between both parties. Even with the fluctuation in the relationship between Turkey and Iraq -given the regional instability and security issues- Turkey is still the most important trade partner of the Northern Iraq administration. Since Iraq’s Kurdistan Regional Government has drawn a clear line between itself and the PKK, the basis of the relationship between the two regional actors has improved.

To sum up, any accusation against Turkey for having some kind of Kurdish antagonism in the last 15 years is baseless. It is obvious that Operation Peace Spring does not target the Kurdish population. Moreover, it is crystal clear that the PKK’s operation and existence in the region do not promise a happy future for the Kurds, because the truth is, it only tries to produce a puppet regime to serve the West’s agenda.